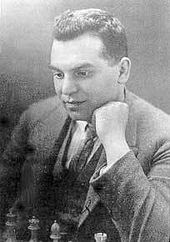 The Réti Opening is a hypermodern chess opening characterized by the opening move 1.Nf3 to prevent 1...e5, with the intention of following up, against the "classically recommended" response 1...d5, with 2.c4, coupled with a kingside fianchetto to create pressure on the light squares in the center. One idea behind the opening is to either bring the d5 pawn under attack from the flanks, or entice it to advance to d4 and undermine it later. Because the single opening move 1.Nf3 is rife with transpositional possibilities, it is incorrect to infer that any chess game opening with that move is an example of the Réti Opening. For example, 1.Nf3 d5 2.c4 e6 3.d4 Nf6 4.Nc3 is the Queen's Gambit Declined. The Réti should not be thought of as a single opening sequence, and certainly not a single opening move, but as an opening complex with many variations sharing common themes. It is named after Richard Réti, an untitled Grandmaster from Czechoslovakia who most famously used it to defeat José Raúl Capablanca, the reigning World Chess Champion, in a game in the 1924 New York tournament. The Réti Opening was introduced into master play in the early part of 1923, according to Réti.[1] In the Encyclopaedia of Chess Openings (ECO) Réti Opening is classified A04-A09. Hans Kmoch called the system of attack employed by Réti in the game Réti-Rubinstein, Carlsbad, 1923 "the Réti Opening" or "the Réti System." Savielly Tartakower had earlier named this opening "The Opening of the Future."


Scoresheet of Réti-Capablanca gameAccording to ChessBase, out of the twenty possible opening moves, 1. Nf3 ranks third in popularity. It develops the knight to a good square and prepares for quick castling and prevents Black's occupation of the center by 1...e5. White maintains flexibility by not committing to a particular central pawn structure, while waiting to see what Black will do. Two slight drawbacks to the move are that it blocks the f-pawn, and forgoes the option of playing Nge2, ruling out the possibility, for example, of playing the Sämisch system against the King's Indian