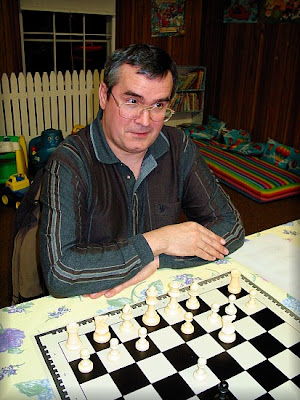 This game is currently in the January/March 2009 issue of Atlantic Chess News , where the link can be found on Jim West On Chess.

The game was played in the World Amateur East Team Championship in February 2009 at Parisippany, New Jersey.

Dragan ( born in Bosnia, previously known as Yugoslavia ) was new to the HCC in November, 1999. He entered his first tourney (Game 15 Championship) and came out 4-0 in First Place. Since that time, we have not seen this Club Champion lose more than 2 or 3 games


In addition to being a very strong Chess player, Dragan is perhaps the softest spoken high rated player I've ever known ... a true gentleman
Posted by Diamondback at 10:32 PM