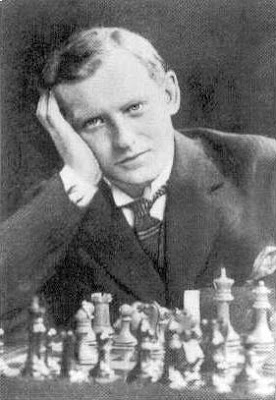 Alekhine's Defence is a chess opening beginning with the moves

1. e4 Nf6
It is named after Alexander Alekhine, who introduced it in the 1921 Budapest tournament in games against Endre Steiner[1] and Fritz Sämisch.[2] Four years later, the editors of the Fourth Edition of Modern Chess Openings (MCO-4) wrote, "Nothing is more indicative of the iconoclastic conceptions of the 'hypermodern school' than the bizarre defence introduced by Alekhine ... . Although opposing to all tenets of the classical school, Black allows his King's Knight to be driven about the board in the early stages of the game, in the expectation of provoking a weakness in White's centre pawns."[3] White's imposing mass of pawns in the centre often includes pawns on c4, d4, e5, and f4. Grandmaster Nick de Firmian observes of Alekhine's in MCO-15 (2008), "The game immediately loses any sense of symmetry or balance, which makes the opening a good choice for aggressive fighting players."[4]

In addition to Alekhine, another early exponent of the defence was Ernst Grünfeld. Its popularity waxes and wanes; currently it is not very common. De Firmian observes, "The fashion could quickly change if some champion of the opening takes up the cause, as the results Black has obtained in practice are good."[4] The opening's current highest-rated proponent is Grandmaster Vassily Ivanchuk, although Grandmaster Lev Alburt has done much to promote it. De Firmian writes, "Currently Grandmasters Shabalov and Minasian use the opening with regularity, while Aronian, Adams, and Nakamura will use it on occasion. In the past, great players such as Fischer and Korchnoi included the defense in their repertoire, leading to its respectable reputation
Posted by Diamondback at 10:43 PM