Speed Chess With A Bang ! 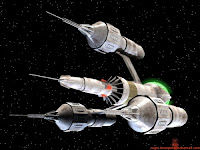 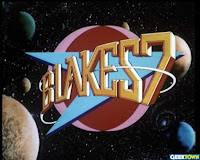 Here is link to a You Tube that shows that Speed Chess can be played for high stakes. The video is from the British Sci Fi show Blake's Seven that ran in Britain from 1978 to early 1980's.


Infomation about this British spin off of Star Trek can be found at Wikipedia.

The highly regarded British science fiction series Blakes 7 was created by Terry Nation, one of the prime movers of Dr. Who. Gareth Thomas stars as Blake, an extraterrestrial do-gooder. With a seven-person crew comprised of criminals and insurgents, Blake wages an unending battle against "The Federation," the totalitarian regime which controls the Earth and hundreds of other populated planets. Set in a post-apocalyptic future, Blakes 7 has attained cult status in the U.S.; it was somewhat difficult to see until it fell into the hands of local PBS stations and such cable outlets as the Sci-Fi Channel. ~ Hal Erickson, All Movie Guide
Posted by Diamondback at 1:04 AM