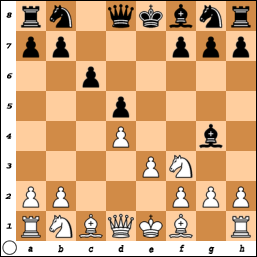 This chess blog is for all amateur chess players under the USCF rating of 2200.
and this is my first chess blog. In the future I will add chess diagrams and some light annotations to my chess games I post here.
*** Please note this content of this post was first published on August 24, 2008 Sunday *** the date of my first ever blog post here on Google Blogger E Blogger.

Here's a chess scoresheet for a chess tournement that was just played recently by myself at Hamilton Chess Quads at Groveville , New Jersey. I played White. The game was played on
August 23, 2008.


Click on Show Chessboard to open game and Click on any variation move which plays that variation out .


The real names of the players have been changed to protect their privacy.

The game was played rather fast by opponent even though the time control was 40/80 minutes and 15 moves every 30 minutes for the second time control.

After move twenty -five the game was in the bag for White. In fact after move 25, Black stopped writting down the moves on his scoresheet, something the TD should keep and eye out for, but I did not cry foul because Black's postion was lost.

Also during the last ten moves of the game, my opponent was talking trash as to why I was'nt moving as fast as he did. At that point the TD stepped in and told him to stop running his mouth.
Posted by Diamondback at 1:55 PM