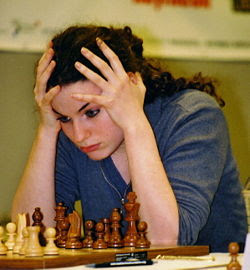 
Naked Chess from jen on Vimeo.

Jennifer Shahade at the 2002 U.S. Chess Championships in Seattle, WashingtonJennifer Shahade (born December 31, 1980 in Philadelphia, Pennsylvania) is an American chess player and writer. She is a two-time American women's chess champion and, as of October 2007, has a FIDE rating of 2322. She has the FIDE title of Woman Grandmaster. Jennifer is the author of the book Chess Bitch. She also writes for the magazine Chess Life and is the daughter of FIDE Master Mike Shahade and Drexel University chemistry professor and author Sally Solomon, and the sister of International Master Greg Shahade.

Shahade lives in Philadelphia and has earned a degree in Comparative Literature at New York University. Her writing has appeared in the LA Times, The New York Times, Chess Life, New In Chess, and chessninja.com. Her first book, Chess Bitch: Women in the Ultimate Intellectual Sport (Siles Press, ISBN 1-890085-09-X) was published in October 2005.

In 2006 Shahade was hired by the United States Chess Federation to be the web editor in chief of its site www.uschess.org . In 2007 Shahade co-founded a chess non-profit called 9 Queens.