Back Against The Wall In Last Round 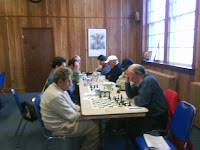 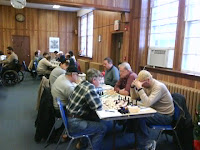 In the third and last round at the January 24, 2009 Hamilton Quads, it was do or die in the six man swiss. My score was 1 0 1 which means I had only one win so far.
I neede a big win in the last round to get second place and the prize money.

My opponent Big Sal is a tough opponent and he crushed me the last time I played him a few months ago. A fellow chess player Atomic Patzer finds Big Sal a difficult adversary over the board. In fact the last time Big Sal played Atomic it ended in a hard fought draw.

On my move for Black, I gave a tacital shot ....19. Rook takes Bishop, if Whites Queen takes Blacks's Rook , he walks into a knight fork with Whites Queen and Kind , so White can't touch that rook. After that I improvised by moving Black's Rook back and swinging it over to to White's G file, focusing on White's King. Fortunately for me , White did not see any real mating nets forming and instead decided to take my hanging knight which resulted in a forced mate for White.

The game is posted below in a Chess Flash playing board. Jim West if you look at this game maybe you can find a faster way for Black to win.

Full Analysis of Sal vs Diamondback at Hamilton Quads

Posted by Diamondback at 6:18 PM