Posted by Diamondback at 10:44 PM No comments:

Best Of Diamondback Chess For Year 2008

As the year 2008 is drawing to a close, I would like to post my favorite blog posts that I have written in the year 2008.

Since this blog was just recently started late in the year 2008 with the theme " Chess From The Amateur" I have compiled in this last post for the year 2008 only posts that deal with the Amateur Chess Player.

I will be on hiatus from my blog but I will have others guest blog for me . Thanks Diamondback

The Endgame Tactician: Bishop and Pawn vs Bishop - Chess.com

The Endgame Tactician: Bishop and Pawn vs Bishop - Chess.com


The first game is courtesy of fellow blogger Endgame Tactian which he placed on wwww.chess.com with Bishhop and Pawn endgame technique.

The games below are complete game moves from Jose Capablanca which I uploaded from www.chessgames.com that cover Bishops of same color endgame technique.

Also here is link to Capablanca's Best Games Collection compiled by Notyetagm at Chessgames.com for the Capablanca fan.


Endgame Analysis at Move 49 for white for JR Capablanca vs D. Janowski 1916 in NY.
Bishops of Same Color


Endgame for Menchik vs Capablanca Hastings 1931 starting with Move 23 for White shown below:
Bishop of Same Color


Opposite Color Bishops endgames with complete game score sheets played by Jose Capablanca are listed below:


Endgame analysis for Capablanca vs Thomas at Hastings in 1929 Bishops of Opposite Colors at Move 26 for white.

Posted by Diamondback at 10:31 PM No comments:

Although Topalov is already the No. 1 player in the world, according to unofficial live rankings, the latest victory propels him well above the 2800 rating level that has only been breached by three other players: Garry Kasparov of Russia, Vladimir Kramnik of Russia and Viswanathan Anand of India, the current world champion.

Games of the Pearl Spring Tournament

Posted by Diamondback at 12:04 AM No comments: 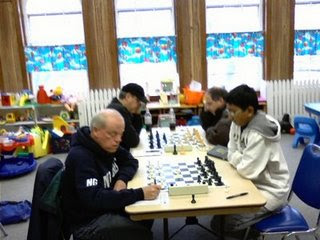 Posted by Diamondback at 12:19 AM No comments:

George's Diamond In The Rough

This game was played by George aka " ChessPig " on ICC during the November 2008 Hamilton Quad in Round One. His opponent playing white is John B. who is the past has turned the tables on many class A players in his past tournement play.

George had a lot of help in this game from his opponent when White on move 23. moved his Knight to d2 blocking his defense of the d3 square by white's queen. Nd2 which resulted in Black knight's occupying a hole on d3. The second positional blunder followed by White moving his rook to c2 on move 24. which resulted in blsck deflecting the rook away from the defense of his knight on c3. With doubled rooks on the C file, Black snatched up the knight on c3. From that point on White was on the defensive.

At the 2008 National Chess Congress at Philadelphia, Pennsylvania,George had GM Arthur Bisguier analysed his game from opening to endgame, after which GM Bisguier commented by saying " George you pick your opponents well "

A more detailed explanation on how to use the MSA Chess Statistics Program can be found here at the MSA Download Webpage
and on my previous post dated October 14, 2008 which redirects to a more complete use of MSA by fellow blogger Castling Queenside "MSA Chess Statistics Intro"


Listed below is George's Chess Statistics dating from 1991 to 2008

Posted by Diamondback at 12:19 AM No comments: 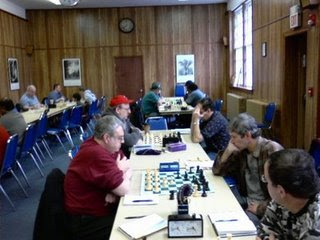 Posted by Diamondback at 9:58 PM No comments:

Here are five games played by Jim West as Black using the Falkbeer Counter Gambit.
All of the games posted below were played in the early 1990's by Jim West.
For most complete analysis of the games, please use the link above which directs you to the post at Jim West On Chess.

Please note the content of this chess post and chess games were orignally published in the January/February 1996 edition of Atlantic Chess News.
Also this chess material was written by Jim West, National Master , New Jersey, USA


Again, here is the link to Jim West On Chess Falkbeer Counter Gambit which has all the analysis of the games shown below.
http://jimwestonchess.blogspot.com/2007/02/falkbeer-counter-gambit.html

This Game Below was Drawn

Posted by Diamondback at 12:27 PM No comments:

Part One of Two

Posted by Diamondback at 1:18 AM No comments: 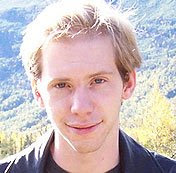 Posted by Diamondback at 12:30 AM No comments: