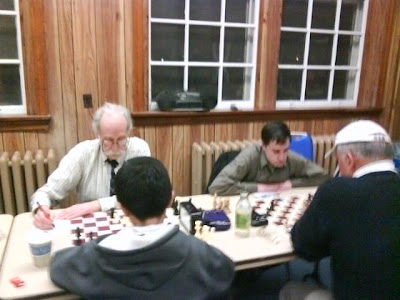 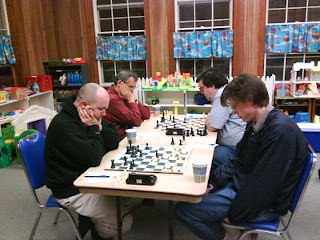 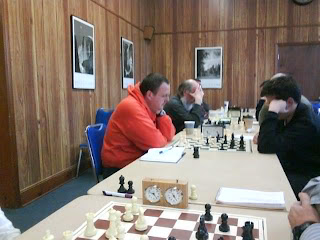 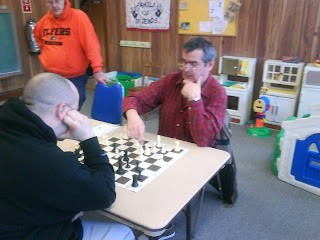 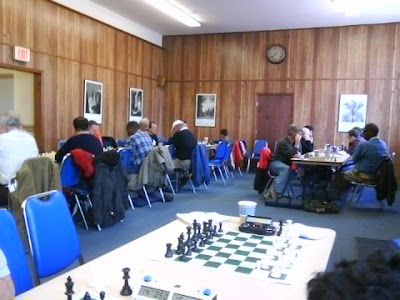 Posted by Diamondback at 11:40 PM No comments:

Linares Super-GM
Posted by Diamondback at 10:24 PM No comments:

Hello everyone out there in the Chess Blogspheere. I am posting my third round loss with only the endgame position.

I have played Bill six times before and managed only one win against him. It seems I always get a weak or lost postions in the middlegame due to poor opening play against my opponent Bill B.

Not to take anything away from Bill B, he is a strong Class C player but one should never lose most of one games against him.

One footnote, Atomic Patzer has two wins out of three rounds with one more round to go next week and he should breeze into the final HCC Club Championship nex month.

Posted by Diamondback at 9:59 PM No comments:

Courtesy of the NJ State Chess Federation , I have copied and pasted the top prize results here. Above is the link where you can be redirected for the same prize results that are listed on this Chess Blog.

In the near future Atomic Patzer may post some of his photos and games from his participation in the 2009 USATE Team East chess tournament. Naturally the name of his chess blog is: Atomic Patzer "just another chess fan blogging"

2009 World Amateur Team Results
As another President's Day passes, so does the 39th Annual World Amateur Team!!! Congratulations to Palin Gambit: Give Up for winning for winning first place with a perfect 6-0 score, as well as all teams that participated. If you have won a prize, please email us your address (even if you left it at the site) in order to insure it is delivered to you promptly and at the correct address.

Here are the results:

Biggest Upset (per round):
Round 1: Eliot Breslov
Round 2: Christian Carney-Titone
Round 3: Sriran Datattreya
Round 4: Michael Dufermot
Round 5: Maryam Vulis
Round 6: Andrew Tham
Posted by Diamondback at 8:46 PM No comments:


Here is an archive link from Chess Cafe spot lighting what the Amateur Team East Tournament is all about.

Here is a link to the U.S. Chess Trust web page detailing the Amateur Team events during Presidents' Day

Chess Queen on You Tube

I have seen this You Tube video of the reigning Chess Queen posted on many individual blogs including Jim West's chess blog " Jim West On Chess" and have decided to add it to my chess blog to promote Women In Chess....diamondback

Note: Chess Base Report and Bio added one day after orignal post on February 8, 2009....diamondback

Her name is Alexandra Kosteniuk. Here is her Bio from Wikipedia.


Born: 23 April 1984
Birthplace: Perm, Russia
Best Known As: The Russian champ who says "Chess is cool"
Russian fashion model Alexandra Kosteniuk is also the 2008 Women's World Chess champion. In the top tiers of international chess competition since her teens, she was intitially compared to tennis star Anna Kournikova: a young talent not shy about showing off her good looks. Trained by her father, Kosteniuk began playing chess as a little girl, and became a European champion before she was 10 years old. She became an International Woman Grandmaster in 1998, an International Master (competing against men) in 2000, and an International Grandmaster in 2004, the same year she won the Women's European Chess Championship. She and her father published a book, How I Became Grandmaster at Age 14, and followed it with her own line of chess games and DVDs. In later years she has become a mentor for other young chess players, pitching the game with her mottoes "chess is cool" (also the title of her podcast) and "beauty and intelligence can go together."

Enter a word or phrase...

Alexandra learned to play chess at the age of five after being taught by her father. She has a little sister named Oxana, who is a master level chess player.

Her chess career is full of notable achievements. In 2001, at the age of 17, she reached the final of the World Women's Chess Championship, but was defeated by Zhu Chen. Three years later, she became female European champion by winning the tournament in Dresden, Germany. She also won the 2005 Russian Women's Championship, held in Samara, Russia, finishing with a score of +7 =4 -0. In August 2006, she became the first Chess960 (Fischer Random) women world champion after beating Germany's top female player Elisabeth Pähtz 5.5-2.5. She defended that title successfully in 2008 by beating Kateryna Lahno 2.5-1.5 [1]. However, her top success so far has been to win the Women's World Chess Championship 2008, beating in the final the young Chinese prodigy Hou Yifan, with a score of 2.5-1.5.

Alexandra at the 35th Chess Olympiad, Bled 2002.In November 2004, she was awarded the International Grandmaster title, becoming the tenth woman to receive the highest title of the World Chess Federation, FIDE (see Fédération Internationale des Échecs). Before that, she had also obtained the titles of Woman Grandmaster and International Master. She is 10th on the July 2008 FIDE women Elo rating list with a rating of 2510.

Kosteniuk's mottos have been "chess is cool" and "beauty and intelligence can go together". With these as a backdrop, Kosteniuk has been promoting chess in the capacity of a fashion model and ambassador of chess in order to spark interest in the game around the world.[2]

She is also the host of a popular podcast "Chess is Cool" which informs listeners about Alexandra's life and current chess events.

Kosteniuk is married to Swiss-born Diego Garces, who is of Colombian descent, and 25 years her elder.[3] On April 22, 2007 Alexandra gave birth to a daughter, Francesca Maria. Francesca was born 2 1/2 months premature, but after an 8 week stay in the hospital, has since made full recovery.

Alexandra's website, which is maintained by her husband, covers the chess events she is participating in and offers up to date information about her.


This entry is from Wikipedia, the leading user-contributed encyclopedia. It may not have been reviewed by professional editors (see full disclaimer)

Join the WikiAnswers Q&A community. Post a question or answer questions about "Alexandra Kosteniuk" at WikiAnswers.

Who2 Biography. Copyright © 1998-2008 by Who2, LLC. All rights reserved. See the Alexandra Kosteniuk biography from Who2. Read more
Wikipedia. This article is licensed under the GNU Free Documentation License. It uses material from the Wikipedia article "Alexandra Kosteniuk". Read more

Related questions
What does the name Alexandra mean?
Who is Queen Alexandra?
Is there a Saint Alexandra?
» More
ADVERTISEMENT
Mentioned in


Best Matches
Posted by Diamondback at 4:09 PM No comments: